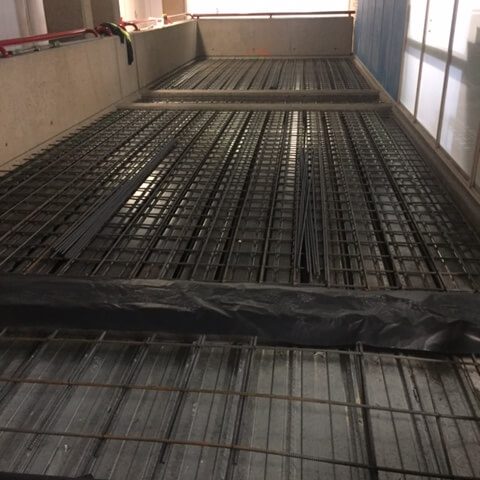 Westmead Hospital is a major tertiary hospital and one of the largest in Sydney, opening in 1978. There have been a number of upgrades and renovations over the years and it was planned to extend the second level Gastroenterology ward by adding an additional 5 metres of floor space over existing architectural beams, which were directly above the shopping area.

The challenge that initially faced AGS Structural P/L when first looking at the infill slab required, was how to provide formwork that needed to span a minimum of 5 metres between existing concrete beams. The formwork could not be propped without interrupting the businesses located underneath and these shops are required by the hospital and operate 7 days a week.

The initial plan was to relocate all the shops to a temporary area for the expected 4-5 weeks duration of the building work, but it was ruled out as an option and an alternative was sought.

The solution chosen was to use Truedek® TD110mm that could span the 5.4m width without needing to be supported from underneath. The trusses were manufactured to exact measurements in the Truedek® factory and then delivered to site.

AGS Structural where then able to carry each panel up stairwells in the hospital and put them into place without any additional equipment due to the light weight of the Truedek trusses. This was done in the evening to minimise any disruption to the daily operation of the hospital. The trusses were then mounted on support angles attached prior to the installation, effectively becoming a working platform, allowing speedy progress till the corridor was completed and the reo attached and the concrete poured. All done with no propping and virtually no down time to the businesses on the level below.

As Sarkis Francis, Director of AGS Structural says, “This system was a critical component in the project success. Propping to the underside of the slab was not an option, so the Truedek system was the perfect match. With Westmead Hospital being a sensitive work site, everything had to go to plan and on time, and with Truedek, it did”.

Thank you to David Allan and his team of experts who made this possible”.